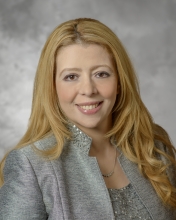 Board Certification:
American Board of Pediatrics
American Board of Pediatrics-Neonatal-Perinatal Medicine
Clinical Interests:
Point of care ultrasound (POC-US) program in the NICU is a bedside tool for immediate diagnostic and therapeutic purposes. It has many great benefits: quick, focused and no ionizing radiation allowing timely lifesaving therapeutic interventions.
Neonatal Neuro-critical care program: Combining Neuro-monitoring and Neuro-imaging to provide optimal care for infants at risk or who had developed brain injury. This is a multi-disciplinary team of experts in neonatal neurology, neonatology, neuro-radiology, and developmental pediatrics, occupational and physical therapy. Our main goal is to the outcome of these vulnerable babies.

Link to publications on PubMed