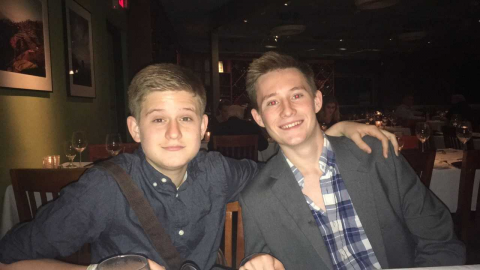 Alexander Rundquist was only six weeks old when his mother, Laura, felt a bump next to his spine.

She immediately made an appointment with his pediatrician that day. Upon examination, the pediatrician requested further testing. Those tests revealed that Alex had a rare non-rhabdomyo fibrosarcoma—a tumor that develops in the soft tissue of the body.

“It felt like the world went dark,” recalled Laura. The fibrosarcoma was in the muscle against Alex’s spine and growing quickly. The prognosis was grim: Alex had only a small percentage of survival.

“The treatment days were long and exhausting,” said Laura. “But I remember William, Alex’s older brother, playing with the nurses in the clinic and being treated like family every time we came in. In a situation where comfort is farthest from the reality, knowing the team was there to support Alex and our whole family made an impact.”

Unfortunately, the chemotherapy treatments didn’t stop the fibrosarcoma’s growth. Since Alex had received the maximum amount of chemotherapy his body could handle, Laura and the medical team decided on surgery to remove the tumor.

The surgery was quite difficult. In addition to removing the fibrosarcoma, the surgeons had to remove a piece of cancerous muscle (about the size of a playing card), along with five ribs and part of Alex’s chest wall.

“The decision to remove the ribs, part of his chest wall and muscle was not an easy one,” said Laura.  “As a result, Alex developed life-threatening scoliosis that required rods to be placed along his spine.”

Alex has had his spinal rods surgically adjusted every six months since his surgery when he was an infant. “Alex is now 15 and has had more than 30 surgeries since his cancer was removed,” said Laura. “Despite this, he is still one of the funniest, happiest, busiest kids I know I know. Alex was meant to do amazing things and accomplish so much. He is a cancer survivor, but he has not let that be the only thing that defines him.”

These days, Alex is an avid scuba diver and recently dove in the Caribbean while on vacation with his family. In addition, he and his family have also traveled China and had many amazing cultural experiences while there. He also enjoys volunteering in the Tucson community and with his church, and has plans to study abroad.

Alex continues to receive regular exams with his Steele Center physicians at Diamond Children’s, to make sure he remains cancer-free.

“Alex has proven that anything is possible,” said Laura.  She never gave up, even when the odds were stacked against him. “The hope that comes from making plans, whether it is the next medical appointment or the next big family vacation kept everyone focused on the future and making progress.”

In the 25 years that the Steele Center has been helping children it has been incredible to see the successes of patients like Alex and the hope that he and his family bring to so many!