Here are additional highlights of Elks-supported projects over the years:

Amount raised: $2.25 million
Arizona Elks Endowed Chair in Statewide Pediatric Research (Chairholder: Wayne Morgan, MD): This endowed chair creates a leadership position to help focus on the Steele Children's Research Center's role as a thought leader in children's health in Arizona. One of the ways this will be accomplished is by continuing to expand clinical research throughout the state, primarily in Maricopa County, due to its population.
Arizona Elks Endowed Faculty Research for Technology and Innovation (Chairholders: Fayez K. Ghishan, MD and Pawel Kiela, DVM, PhD): Having direct access to the newest equipment permits our researchers to conduct scientific experiments much more quickly. This endowed research fund provides perpetual funding to ensure that our researchers have an annual resource to support purchasing and maintaining innovative equipment for labs. 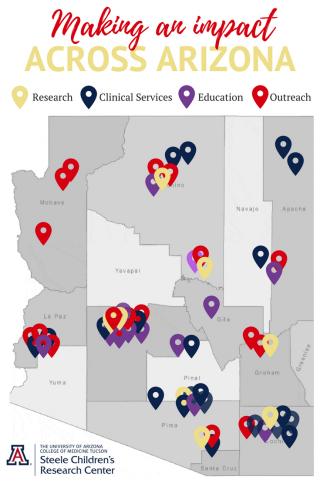 Amount raised: $2.5 million
In 2003, the Arizona Elks committed to creating the “Arizona Elks Endowed Chair in Neonatology Research.” An endowed chair generates income that lasts forever. Every year, a portion of the interest is available to the Chair to support research and provide seed funding to promising young investigators interested in neonatal research.

Amount raised: $275,000
One of the first projects the Elks undertook was supporting the building of two research labs on the sixth floor of the Steele Center. These labs currently house researchers who specialize in
gastroenterology and nutrition.

Amount raised: $130,000
Marvin Lewis, a past Grand Exalted Ruler, was passionate about education and helping children. Funds were used to renovate the pediatric residency offices and create a conference room. Upon completion, the space was named the “Marvin Lewis Pediatric Teaching Center.”

Amount raised: Priceless
There is simply no price that can be assigned to the hundreds of blankets, beanies and booties that have been knitted by the Elks for the premature babies at Banner University Medical Center. Or the thousands of donated toys and blankets that have brought a smile to a sick child’s face.
We are immensely grateful for these priceless gifts from the Arizona Elks lodges throughout Arizona.

To learn more about the Arizona Elks, visit their website.