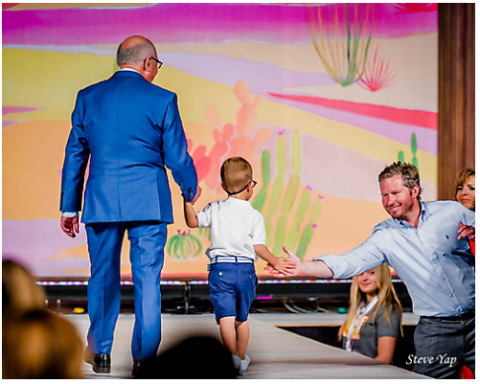 PANDA hosts the Children Helping Children Fashion Show in Phoenix. Attended by more than 1,000 people each year, supporters of the event have given more than $15 million over the past 20 years to help the Steele Children's Research Center.

To learn more about the PANDAs, visit: www.azpanda.org.

The funds raised this year will allow us to purchase the NovaSeq Instrument, a state-of-the-art genome sequencing machine that is faster and more efficient than past equipment. With this new equipment, genome sequencing can be completed on 48 children in as little as 40 hours. By sequencing these cells, physician-scientists will be able to discover underlying microbiome composition that can lead to answers for a number of fundamental biological and clinical questions. Additionally, physician-scientists will be able to study genes at a single cell level which allows analysis of gene expression, or changes in DNA structure which is key to early diagnosis and treatment of a multitude of pediatric diseases, including cancer, diabetes, epilepsy and many other chronic diseases.

Physician-scientists at the Steele Children’s Research Center bring their research from “bench to the bedside” and examine complex children’s medical issues. PANDA is proud to fund medical research prioritizing in three areas of research: autoimmunity, developmental/behavioral pediatrics, and genomics to produce new ideas, novel treatments and hope to find cures for our children.

PANDA supports the Children’s Cancer Inflammation Project which will investigate the gut health of children undergoing bone marrow transplants with the goal of adjusting their diets to improve their responses to treatment and prolong life. The study will be done in conjunction with whole genome sequencing, searching for answers and treatments for cancer-causing mutations. The hope is to reveal information about the role of diet and dietary factors in the transgenerational occurrence of cancer in children.

PANDA passionately supports research better understand the complicated etiology of infantile epilepsy. The project this year looks to support research, in collaboration with Rady Children's Genomic Institute, that seeks to explore both the basic science and clinical aspects of epilepsy. This includes incorporating genetics, metabolic and structural brain issues into the protocol. Emphasis will be placed on children who are diagnosed with the condition during infancy and early ages. Rady will provide the whole genome sequencing that the Steele Center will investigate the mutations and determine their functionality. This will yield a better, more personal treatment for children and create a new paradigm by which physicians and scientists treat patients.

This project created an interface between traditional cancer chemotherapies and immune-based strategies, focusing on pediatric cancer patients. PANDA supported research to identify a new generation of anti-cancer drugs with the ability to contain the cancer, develop natural immunity to the cells, and reduce the emergence of tumor cell clones.

PANDA is working to increase the likelihood that babies can leave the NICU healthy and in the shortest amount of time. Of the myriad of health issues that premature babies face, necrotizing enterocolitis (NEC) is the most common gastrointestinal disease that affects them. The Steele Children’s Research Center is the only facility in the state of Arizona that combines the highest-level clinical services for preterm infants along with cutting edge basic science research.

Project 2010 funded the PANDA Children’s Cancer Immunology Program that is on the cutting-edge of offering a promising option to fight cancer. Children fighting cancer face tremendous odds. Despite advances in survival rates, chemotherapy and radiation are toxic, causing short-term suffering and long-term complications.The PANDA Children’s Cancer Immunology Program funded research for a new option of treatment—immunotherapy. Immunotherapy re-programs a child’s own disease-fighting cells to recognize his or her own individual cancer cells and prevent them from multiplying. Scientists believe that a child’s own immune system may become an effective way to treat cancer or to prevent relapses. Dr. Emmanuel Katsanis at the Steele Children’s Research Center heads a team of physician-scientists conducting research in pediatric immunotherapy. Dr. Katsanis and the Steele Center are one of the few research centers in the country conducting pediatric cancer immunology research and developing novel immunotherapy treatments against cancer.

The 2008 “Children Helping Children” Fashion Show proceeds funded the “Women in Science” program being developed at the Steele Children’s Research Center. While more and more women enter the medical field every year, currently only 25% of physicians are women and even fewer practice medical research. The Steele Center’s “Women in Science” program supports promising female physician-scientists as they build their clinical and research careers.

The PANDA Children’s Aerodigestive Disorders Center is both a clinical and research facility. It is the only one of its kind in the entire state of Arizona. The center serves children who are suffering from eosinophilic gastrointestinal disorders – disorders of the digestive tract caused by allergies to food and airborne allergens. These disorders are known as “EE” for eosinophilic esophagitis, and “EG” for eosinophilic gastroenteritis (a more debilitating form of EE). Children with EE or EG often fail to grow, suffer from nausea, vomiting, stomach pain, choking, cramping, and diarrhea. Arizona has far more cases of EE/ EG than the national average, yet there was no place in the western U.S. where children can receive dedicated care for this painful disease. In response, the PANDA Center now serves Arizona and the Southwest, employing a team approach to treat children with aerodigestive disorders.

Purchased a Virtek Chip Writer, which utilizes microarray technology that speeds the search for genes responsible for specific diseases.